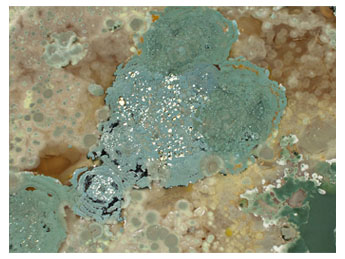 On of a number priority direction of  our tasks was the maintenance or rise of food products safety during grain processing. The toxigenic fungi affect usually the definite anatomic grain parts, where the main mass of mycotoxins is concentrated. In the cereals milling and extraction process, during grain wet-milling, nixtamalization and so one the redistribution of mycotoxins takes place, also their partial destruction and disposal with wastes. These processes bring to some decontamination of the major food products. The degree of decontamination depends upon the used technology, chemical mycotoxins properties, peculiarities of processed grain and specificity of toxigenic fungi diseased it.

The essential  mass of mycotoxins concentrates as a rule in bran and feed wastes, because the most part of saprophytic fungi, for example A.flavus, develop in storage on or inter surface layers of grain. The  content of aflatoxin B1 in bran over-comes that in raw grain by 3-4 times, whereas in flour it is usually in 1-4 times lower. The aflatoxins concentration increases in meal from the super (top) grade to the second grade.

In milling of scabby wheat and barley is observed the weak decontamination of foodstuffs, as a result of the deep Fusarium and DON penetration in kernels during maturing and uniform distubution in grain. DON evenly contaminates all flour grades (49-54% of raw grain). Since the content of toxin in major flour streams varied insig-nificantly (46-67% of the initial concentration), it was impossible to group machine flours with different DON concentrations.

The degree of flour contamination was influenced by DON content in scabby wheat and by the intensity of Fusarium damage of kernels (r = 0,77). This index is expressed as a percentage ratio of the shriveled, friable, severely damaged kernels to the total amount of affected kernels.

Identical mycotoxin distribution was observed in industrial millings of soft hard red wheat with middling off-take. Among the products of the  industrial milling farina and macaroni semolina, produced from inner glassy parts of endosperm, were also less contaminated; however the DON contents in superfine, first, and second grade flours were distinctly higher because friable scabby kernels are processed mainly in flour.

Bread-baking may cause partial degradation of mycotoxins, such as aflatoxin B1 and ochratoxin A. The effects of this process on DON is minimal. The variability of the DON concentrations in flour, bread (and in its separate parts) didn’t exceed the error of determination. DON content in new baked bread is slightly lower than in flour because of rise in moisture.

Intention of main products decontamination from microorganisms and myco-toxins can be submitted in the wheat milling as follows (in order of increasing): scouring milling – one-grade milling – grade baking milling – grade milling with middlings off-take. The most optimal ways of using fungi-damaged grain are its processing in wet-milling and alcohol-distillation.

In processing of the hulled cultures (rice, barley) the dominant part of myco-toxins removes with wastes, husks and middlings during separation, hulling and po-lishing. The residual mycotoxins concentrations in food products are insignificant (0,7% of AT B1 in polished rice; 7% of ZN and 23% of DON in pearl barley).

Thus, we can see that in processing contaminated cereals mycotoxins generally will survive into the finished products but at reduced levels. In animal feed, however, there may be concentration effects leading to higher levels in feed-products than might de detected in the raw grain. This would to present some problems by the feed production and consumption.
Чтобы оставить комментарий зарегистрируйтесь или войдите на сайт используя свою учетную запись
Наверх ↑