Management of air flows inside steel silo during grain storage

The maximum effect of active ventilation on the grain mass is achieved at the standard air volume not less than 10 m3/ht [2]. The supply of the required air volume does not depend on the silo design and equipment or the stored grain crop; thus, we suggest ensuring this effect by changing the thickness of the grain layer. With a thinner layer thickness, a larger volume of air is supplied. We suggest controlling the grain mass thickness in the silo by the air pressure drop inside the grain mass. This method requires a differential pressure gauge to be installed outside the silo; its dial shall be marked so that to indicate the minimum air pressure drop for different grain crops.

After ventilating, the unloaded grain is returned into the silo. Air consumption is determined by the air pressure drop in the grain layer of a certain thickness. This method does not require consideration of possible air leaks between the ventilator and the grain mass, in contrast to the method determining the airflow rate at the ventilator. This method can be used to assess the tightness and efficiency of silo during operating process [4].

Materials and method
To study the reasons for the condensate formation and to develop methods for its elimination, real observations were performed of changes in the temperature and air humidity parameters in the upper part of two silos with a capacity of 2000 tons in the Tula Region and 10.000 tons in the Tambov Region during wheat storage. In the 2000t silo (manufactured by RIELA, Germany), observations took 20 days (September-October) in 2016. The 10.000t silo (manufactured by GSCOR, USA) was observed for 4 months from October 2017 to February 2018. The values of temperature and relative air humidity were recorded simultaneously every 30 minutes in the following places: outside the silo, under the roof, on the grain surface and in the grain mass depth of the approximately 70 mm from the surface.

Results
It has been established that condensate forms in two variants of atmospheric air conditions and above the grain. The first variant: outside humidity - 100 % (rainy weather), the air temperature above the grain and the outside the silo are approximately equal. Ventilation is not advisable.

The second variant: the outside temperature decreases sharply, but the temperature above the grain rises due to the heat release from the deep layers of the grain mass. Together with the heat, moisture is released from the grain, forming condensate in the over-grain space. In this case, there is a slow natural movement of air up through the grain mass due to the air pressure drop along the silo height [5].
Figure 1 shows graphs of temperature and air humidity parameters changes in a silo with a capacity of 2000 tons from September 20th to October 10th. In the period from September 29th to October 6th, there was an increase in temperature in the over-grain space under the silo roof from 10 to 20 °C - curve 4.

The following four figures show changes in temperature values (lower curve) and relative humidity (upper curve) in the upper part of the silo and outside. The silo was fully filled with wheat grain in mass of 10.000 tons [7].
Figure 2 shows the changes in air parameters inside the grain mass at a depth of 70 mm from the surface. The formation of condensate took place in early February. At the base of the observation period data, the relative air humidity practically did not change, its average value was about 70 %. The temperature varied from 12 °C at the beginning of observations to -12 °С at the end of December. Changes in the values of relative air humidity and temperature were smooth and without significant fluctuations [8].

Figure 3 shows the changes in air parameters on the surface of the grain mass. The condensate formation was observed in late January - early February, with a 5-10­day lead in the condensate formation in the grain layer at a depth of 70 mm. Relative humidity varied from 55 to 100 %. The presented data indicate that the grain mass was moistened inside the silo, first the surface layer, and then in the upper layer at a depth of 70 mm.

It can be assumed that moistening occurred as a result of condensate precipitation from the air of the over-grain space and accumulated condensate on the internal structures of the silo roof [9]. 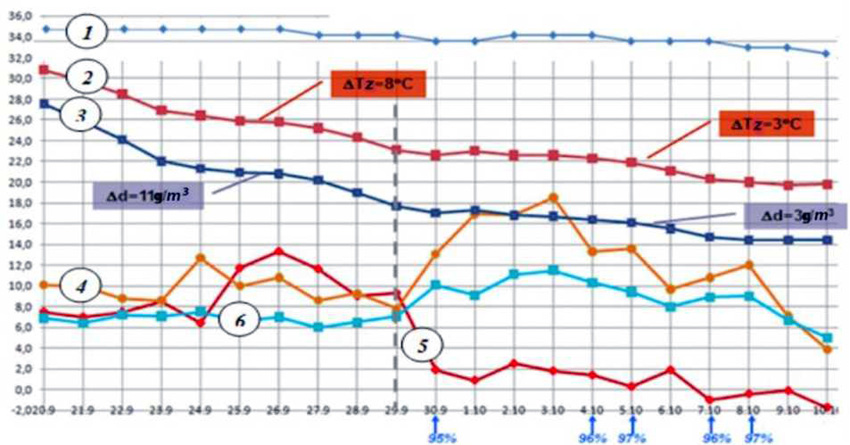 Fig. 1. Average daily changes in air parameters inside and outside the silo with a capacity of 2000 tons of grain

Fig. 2. Changes in relative humidity (upper curve) and temperature (lower curve) in the grain layer at a depth of 70 mm from the surface 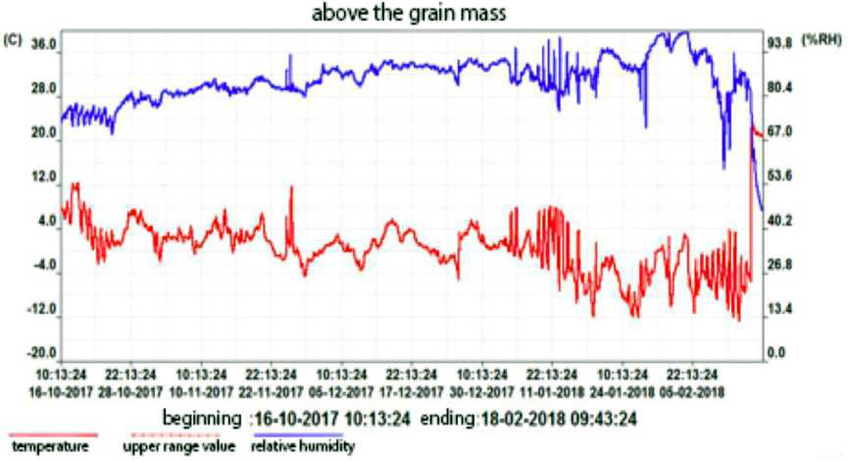 Fig. 3. Changes in relative humidity (upper curve) and temperature (lower curve) on the surface of the grain mass
ata depth of 70 mm

Fig. 4. Changes in the relative humidity (upper curve) and temperature (lower curve) above the grain mass under the silo roof. 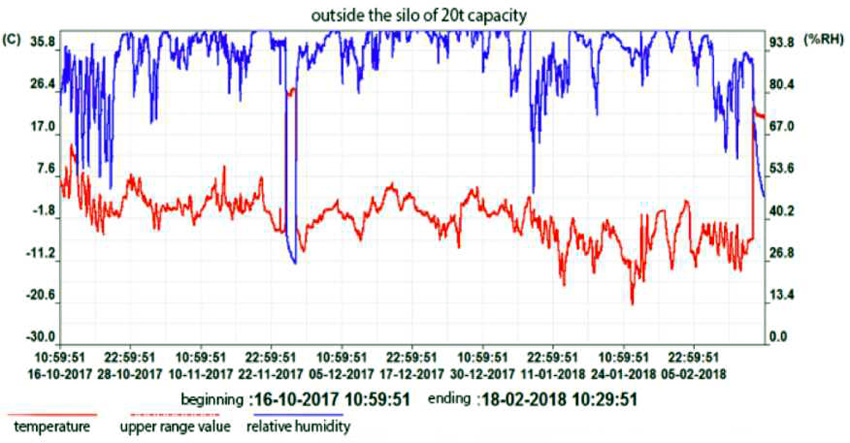 There were periods of over-grain temperature exceeding the outside temperature, and later the temperatures outside and under the silo roof leveled off. Such fluctuations in temperature occurred even during the day apparently due to the heat released from the deep layers of the grain mass being emitted in impulses. The relative humidity of the air followed the heat release [10].

The condensate formation in the over-grain space occurred in the 2nd month of observation or the 3 d month of storage after loading the silo. The total duration of high humidity (exceeding 98 %) in the over-grain space was about 600 hours. At a positive temperature and 100 % humidity outside, the air temperature of the over­grain space was close to the outside ones, and the relative humidity was no more than 90 %. When the outside temperature was about 0 °C and lower and the humidity was 100 %, condensation occurred in the over­grain space. The air temperature inside and outside the silo were approximately equal, the differences amounted to 1-2 °C.

Condensate formed during periods of heat release is the greatest danger to grain preservation. If air humidity outside is 100 % (rainy weather), the air in the over­grain space is cooled by no more than 1-2 °C; when the heat is released from the grain, the air is cooled more than 10 °C, for example, on January 12th from + 7 to -5 °C (according to the table).

4 Conclusion
Based on the above date, the following conclusions can be made:
References