Reduction of the wheat grain losses during its storage period on a national scale potentially gives results similar to an increase in bulk yield. The task of ensuring the safety of wheat food grain can be accomplished not only on the basis of existing regulatory rules, but also by taking into account the results of new research.

The main method of storage in metal containers, according to the instructions [1, 2] and safety regulations is the storage of grain in a dry and purified state [3]. It is known that not only humidity and purity, but also the temperature of the grain put into storage affect the storage period [4]. The lower the temperature, the longer the storage time becomes.

It has been established that the decrease in the organoleptic characteristics of wheat grains, which determine the periods of safe storage and shelf life, is associated with changes in the lipid complex due to the activity of the lipase enzyme. Lipase during storage period splits grain triglycerides to glycerol and free fatty acids, which in cereals are mainly represented by three unsaturated fatty acids: oleic, linoleic and linolenic with one, two or three double bonds respectively. This process leads to a change in organoleptic characteristics, primarily to the deterioration of taste and smell [5]. It is established that these changes reliably reflect the indicator of the fat acidity value (FAV) [6].

An analytical study of the published materials showed:
• the FAV, which determines the period of safe storage period of food grains of wheat, has not been uniformly established and, according to various literary sources, ranges from 11 to 23 mg KOH per 1 g of fat;

When storing grain products with the humidity specified in the target standards, the hydrolytic processes continue as well as the more intense they are, the higher the temperature and relative humidity of the air in the storage are observed. As a result there is an accumulation of hydrolysis products: free fatty acids by the hydrolysis of lipids, amino acids from partial decomposition of water-soluble proteins, acid phosphates from decomposition of phytin, etc.

To determine the change in moisture content during the ripening of wheat flour, this indicator was weekly determined. The results are presented in Table 1.

The analysis of the results in Table 1 shows that the moisture content of the food grain of wheat ranged from 7.1 to 12.5 %, and the moisture produced from the flour was from 13.0 to 14.8 %. It should be noted that in the process of flour ripening of each studied sample, the humidity changed within the limits of permissible variations of the control definitions (0.5 %) of this indicator; which eliminates its effect on the change of FAV in the flour. Table 2 shows the results of the determination of the FAV of the wheat food grains and of the flour produced from it during the ripening process.


Table 1. The change in moisture content of freshly ground wheat flour while ripening at storage period

Table 2. FAV of the wheat food grains and of the flour produced from it during the ripening process Analysis of the obtained data shows that as for all the studied samples FAV of freshly ground flour is significantly higher than the one of the grain from which it was produced [7]. This difference is close to the difference between the acidity of the grain and the acidity of freshly milled flour.

However, if during the flour ripening the acidity value was practically unchanged, then the FAV of the flour changed significantly during the entire ripening period of all the studied samples.

It was noted that the ripening period of each wheat flour sample differed from all the rest - the higher the FAV of the food grain, i.e. the “older” the grain is, the lower the ripening period is under the same storage conditions and close values of flour moisture (Table 2).

To establish the expiration date of wheat grain during long-term storage, the indicator of the fat acidity value (FAV) in mg KOH was considered. The following method was applied: grain samples were placed in desiccators over salt solutions, which created a certain relative air humidity above their surface, Table 4. Samples of wheat grain were stored in desiccators from April to November 2018 at ambient temperature (20^25 °C), 10 ° C and 30 ° C - in thermostats. Table 4 presents the saturated salt solutions to set the values of relative air humidity.

Table 3. The main quality indicators of the of the 3rd class wheat food grain of 2018 and 2015 at a long-term laboratory storage
Salt solutions were poured into the desiccators to create a given relative humidity of air in the internal volume of the desiccator. The values of the relative humidity of the air above the salt solutions are presented in the table above [8]. Before putting in desiccators for storage, the samples of wheat grain were cleared of impurities on an air-sieve laboratory separator [9].

Two samples of wheat grains of the 3 d and 4th classes each of about 500 g were placed in the desiccators; the layer of grain in the desiccators was 70-80 mm. To control the temperature and relative humidity, sensors "Logger 100 TV" were placed inside the grain samples. The interval for automatic recording of sensor readings was 2 hours. Periodically samples of grain were taken from each desiccator for FAV determination and for humidity changes monitoring [10].

Some fluctuations in the relative humidity values during further storage, as can be seen from Fig. 1, are associated with temperature changes at the storage site (laboratory room), as well as with the opening times of the desiccator for taking grain samples to determine humidity and FAV. In all grain samples (desiccators), the values of relative air humidity (Fig. 1) and temperature (Fig. 3) can be considered constant within the measurement accuracy of the sensor, taking into account

Table 4. The saturated salt solutions to set the values of relative air humidity

Table 5. Average actual values of relative air humidity and temperature in the desiccators during the April - October period

Fig. 1. Changes of the relative air humidity in the desiccators during the storage of grain samples (D1.. ,D7 - numbers of desiccators according to Table 1) 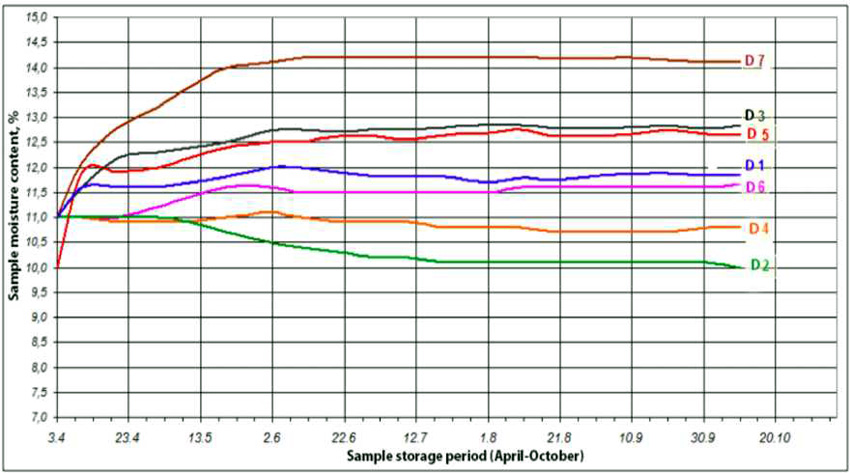 Fig. 2. Change in moisture content of grain samples in desiccators during storage period (D1 .D7 - numbers of desiccators according to Table 1).

Fig. 4. Changes of FAV in grain samples depending on the value of relative air humidity during storage

Fig. 5. Changes of FAV in grain samples during the April-November period

Fat acidity value in grain samples was determined according to GOST 31700-2012. The relative error of the method was ±10 %. Considering the graphs (Fig. 4) of the change in the fat acidity value in stored samples of wheat grain depending on the relative air humidity in the desiccator, it can be noted that FAV practically does not change in terms of storage at air humidity up to 55-60 %. A significant increase in acid value is
observed at a relative humidity of more than 70 %. At the same time, an increase in the acid value substantially depends on the grain sample storage duration.

A significant change in the FAV (Fig. 5) occurs after almost 6 months of the sample storage, in the second decade of September. The point is marked with a vertical red line.
In case of exceeding the relative air humidity inside with respect to the relative air humidity outside, it is recommended to provide ventilation above the grain [4], otherwise the quality of the stored products will be reduced.

Laboratory storage of wheat grain samples in desiccators with different temperature and relative air humidity conditions confirms that the change in grain moisture content during storage corresponds to the specified relative air humidity inside the desiccator. The equilibrium state occurs during the storage period from 3 to 8 weeks depending on the value of relative humidity.

Storage temperature and relative air humidity in a desiccator affect the change (growth) of FAV. The greatest changes occurred at 6th, 7th and 8th months of storage at a relative humidity of more than 65 % and
temperatures above 20 °C.

At a storage temperature of 10 °C, in all the cases the growth of FAV remained insignificant and was within the limits of determination accuracy. It is noted that at relative humidity values below 60 %, the FAV of wheat grain at the same temperature practically does not change for 6 months of storage.

According to the results from storing the wheat grain samples at different temperatures and relative air humidity for 8 months, it may be noted that the storage temperature under the experimental conditions does not significantly affect the growth of the fat acidity value in the samples [11]. The relative air humidity in the grain mass plays a more significant role in the increase in the FAV index, as it is evident from the results presented in Figures 4 and 5.