It was shown quite long ago (Subrahmanyan et al., 1955) that uric acid could be used as an indicator of insect waste in grain and milling products. Somewhat later (Venkat Rao et al., 1957) the uric acid content was shown to be closely correlated with the number of exit holes in the insect-infested kernels. Quantification of uric acid, as a measure of nitrogen metabolism level in certain insects, in particular the wheat weevil Sitophilus granarius (L.), was repeatedly suggested as an alternative to detecting fragments of insects in stored and processed grain (Wehling and Wetzel, 1983; Lamkin et al., 1991).

MATERIALS AND METHODS
The technique for uric acid analysis was based on the Procedural guidelines 4072-86 for detection, identification, and quantification of uric acid in grain and grain products. We used the Stayer high-performance liquid chromatography system (specification 4215-003-18294344; Akvilon, Russia) with a fluorometric detector and the MultiChrom software package for chromatography data acquisition and processing, which operated with the relative standard deviation of the target peak retention time no greater than 0.5%, and that of the peak height and area no greater than 4%. Mobile phase separation was performed using a Synergi Hydro-RP partition column (4 μm, 250 × 4.6 mm) and InertSustain C18 or C18 Aq columns (4.0 × 3.0 mm; Phenomenex, USA). 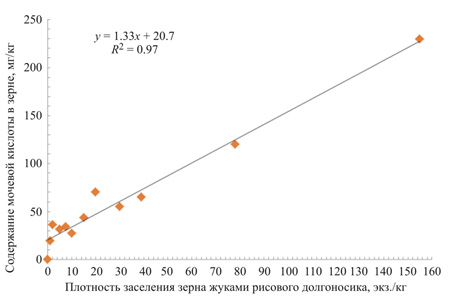 The coefficient of correlation R, calculated for the calibration curve, was 0.998, with a relative standard deviation of 3.139%. To prepare the sample for analysis, 20 g of wheat grain and 200 mL of distilled water were placed in a beaker flask and boiled for 10 min, then cooled to 25°C and filtered through plaited filter paper. Two parallel samples were analyzed, and 2 measurements with 2 chromatograms were carried out for each sample. The mass concentration of uric acid in the analyzed samples was calculated automatically. Then the mean mass concentration for the two parallel samples was determined.

The uric acid content in the grain sample (X, mg/kg) was calculated by the formula:
Х = С х V / m,
where V is the extract volume (200 mL); m is the mass of the grain sample (20 g), and C is the mean mass concentration of uric acid in the analyzed samples, μg/mL. The samples of wheat grain infested with the rice weevil were prepared in glass containers with mesh covers, into which 1.0 kg of wheat grains (humidity 12.2%) and 300 adult rice weevils were placed. The grain had not been previously infested with insects or mites and had not been pre-treated with pesticides. The weevils were obtained from a long-term laboratory culture, without sorting them by sex or age. The containers were kept for 35 days at 25°C and relative air humidity of about 75%.

During this time, the weevils laid eggs and the earliest of these eggs completed their development. Then the parent weevils were removed, and the grain was stored at –11°C until chromatographic analysis. The infested grain prepared in this way was mixed with clean grain in different proportions; thus, we obtained a series of samples with a varying number of infested grains, corresponding to the pest densities of 0, 1, 2, 5, 7.5, 10, 15, 20, 30, 39, 78, and 155 ind./kg. These samples were analyzed for uric acid content.

Our results demonstrate the possibility of issuing a standard setting the tolerance limit for uric acid in grain, corresponding to the existing tolerance limits for grain infestation with different insect pests. Monitoring the uric acid content in grain would ensure consumer safety and would allow detection of adulterated grain products, in particular those obtained by separation of insects from infested grain.

COMPLIANCE WITH ETHICAL STANDARDS
The authors declare that they have no conflict of interest. All the applicable international, national, and/or institutional guidelines for the care and use of animals were followed. All the procedures performed in studies involving animals were in accordance with the ethical standards of the institution or practice at which the studies were conducted.